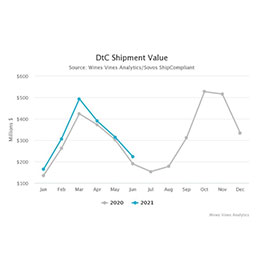 The strong DTC numbers come at a time when on-premise sales are surging back to something closer to normal lifting domestic wine sales as tracked by bw166 to $50.1 billion in the 12 months ended June.  According to the latest Wine Industry Metrics data released in the monthly Wine Analytics Report, the total value of the US wine market in the past 12 months was up nearly 3% to $71.8 billion.

Both bw166 and CGA Strategy are tracking dramatic rebounds in on-premise spending. According to bw166, sales were up 189% in June compared to last year while CGA recorded a 597% increase in April.

CGA’s tally for total sales in the 12 months ended May 22 came to nearly $8 billion, which was 48% less than compared to the same time last year but much better than the 66% decline recorded for the first 52 weeks of the pandemic.

As the on-premise sector recovers, the expected decline in off-premise sales continues with Nilsen reporting a drop of 9% by value to $902 million in the four weeks ended June 19 while volume fell 13% to 9.1 million cases.

With consumers shifting their spending back to on-premise from off-premise, the strength of DTC shipments compared to last year is even more noteworthy.

And of the major regions tracked by Wines Analytics/Sovos ShipCompliant, the wineries of Sonoma County continue to enjoy noteworthy growth of their DTC business. The county was the leader in total volume growth prior to the pandemic and that trend accelerated in the past year and into the current one.

In the 12 months ended June, Sonoma County’s shipments had a total value of $884 from 2.8 million cases, which was 25% more than during the same time last year. Napa County DTC shipment volume gained 6% to 2.1 million cases although Napa remains the value leader by a large margin with a total shipment value of $1.7 billion.

Winery hiring also remains strong, with the Winejobs.com index up 69% compared to June 2020. The increase in postings for open positions continue to be driven by DTC roles, including tasting room staff. The DTC subindex was up 134% compared to last year while the index of sales and marketing jobs was up 60%.

The Wine Analytics Report is a monthly, digital report on the U.S. wine industry produced by the editorial team at Wines Vines Analytics and based on information from proprietary databases and data supplied by partner research firms. The report and Wines Vines Analytics are part of the Wine Communications Group that also publishes Wine Business Monthly.