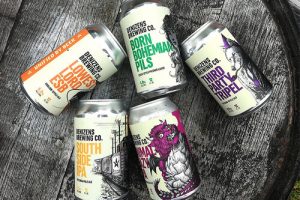 Demand for aluminum cans, which began to rapidly increase in March when the coronavirus first shuttered bars and restaurants, has created a shortage among breweries. Now, it’s starting to impact bottom lines. The beer industry, in which estimates show canned products now account for 60-70% of sales, has seen a strain on supply and subsequent price increases before—but not on this scale.

Orders for aluminum cans from manufacturers of beer, hard seltzer, and sparkling water were already raising the specter of supply-chain issues in January. Now demand has spiked in summer (beer’s biggest sales season) and has been compounded by a huge shift to off-premise sales during the pandemic. Lindsay Boudreaux, vice president of customer success for Saxco, a food and beverage packaging supplier, says demand for cans is “through the roof.” According to data from the Can Manufacturers Institute, reported by S&P Global Platts Insight, canned beverage demand was up 8.3% in the first quarter of 2020, with canned beer rising 6.7% and soft drinks up 9.3%. Canned wine sales increased 79% over the past 52 weeks ending in mid-July. With increased off-premise sales and demand coming from all corners of the beverage sector, many breweries are scrambling to find can suppliers who can fill orders. And they’re facing thousands of dollars in higher prices as a result of diminished supply. In some cases, breweries have to order twice as many cans at once—full truckloads rather than half truckloads—than they normally would. This bulk buying requires putting up tens of thousands of dollars at a time when breweries are financially struggling with pandemic-induced on-premise closures. The shortage extends to all sizes, from 12oz cans to 32oz crowlers, affecting both printed and blank cans (which can be labeled with a sticker or sleeve by the brewery). In some cases, cans are entirely on backorder with no specified restock date. Suppliers say manufacturers can’t ramp up capacity fast enough to meet demand, while breweries are placing orders for more cans than they ever have. Drinkers could soon see out-of-stock notices for some beers if breweries aren’t able to source the cans to package them. And because they’re more vertically integrated, large breweries such as Molson Coors and Anheuser-Busch InBev aren’t suffering such shortages; small breweries used to placing small orders are bearing the brunt.All signs point to continued pressure on the aluminum-can supply chain, which is likely to create headaches for months to come.

“Our survival depends on having cans,” says Rob Lightner, co-founder of East Brother Beer Co. in Richmond, California. “Draft is gone. Our taproom is closed. Every ounce that we used to sell in a pint glass is now going out in a can.”
[Disclosure: East Brother Beer Co. was an underwriter of Good Beer Hunting’s “Beer is Labor” series.]Though some suppliers and breweries had foreseen trouble in the aluminum can supply chain when 2020 began, the COVID-19 pandemic has raised the stakes of the shortage. Breweries desperately need cans to sell their beer to-go from their taprooms or in distribution when, in some parts of the country, draft sales have dried up entirely. Across the country, can suppliers are telling beer businesses their orders will be delayed, or potentially not filled at all. That would leave breweries with the option to sell their beer in bottles—if they have access to them—or to delay packaging their beer. (Saxco reports some breweries are ordering bottles when they’re told can deliveries will be delayed.) Suppliers say they’re doing their best to obtain cans from the country’s two primary manufacturers—Ball Corporation and Crown Holdings, Inc.—and are asking breweries to place orders further in advance than they’ve ever had to.“We are expecting and encouraging our customers to give us longer lead forecasts and orders,” says Saxco’s Lindsay Boudreaux. “We want to make sure that what we’re working on in September and October isn’t going to be an issue.”Normally, Saxco would ask customers to place orders four to six weeks before they expect delivery; now it’s asking for at least 12 weeks’ notice, and preferably longer. Boudreaux says the company expects shortages to last into the fall, if not longer. Saxco is now receiving cans from whichever manufacturing plant has them available, and those factories might be located far from customers, increasing freight costs and shipping times. She says existing customers will likely continue to experience delays that could double the wait time for deliveries, while breweries who hope to begin canning for the first time in the next year will find that a tough hurdle: “That shouldn’t be a 2020 plan for a large customer, in my opinion.”Ball says it has plans for two new manufacturing plants in Glendale, Arizona and an as-yet-unnamed location in the northeastern U.S. It is also increasing production at three existing plants in Georgia, Texas, and Arizona, which will begin to add capacity in the latter half of 2020. In total, a Ball spokesperson says the company will add 6 billion units of capacity by the end of 2021. Boudreaux doesn’t expect such expansions will make a dent in the shortage for a while. “I do think some relief will come in 2021, but it’s not even necessarily January 2021,” she says. This is a dismal prospect for breweries that are eyeing dwindling can reserves in their warehouses while counting on packaged beer to keep them afloat. Bottles could provide some relief, but they’re not the package of choice for most frequent beer consumers. On July 23, Jeff Ramirez, chief beer officer for Denizens Brewing Co. in Silver Spring, Maryland, received a desperate text message from another brewery owner looking to buy blank cans from Denizens so they could package and label their own beer. In an industry that prides itself on camaraderie, breweries are often happy to sell or lend each other supplies—but that’s not an option given the current circumstances.
“I’m like, ‘No man, we need those cans,’” Ramirez says. “We had 10 pallets left on Friday. I think by the end of this week, we’d be at six pallets. If we don’t get them in the next week or so, we’re totally out.”
Ramirez put in an order for another truckload of cans with his supplier, Tripack, on July 24, and was informed the can price had increased 50%, from 10 cents per can to 15 cents, exclusive of shipping costs. The order would normally cost $20,000; the increase adds nearly another $10,000 to the bottom line. Even with the increased cost, Denizens needs the cans, so Ramirez went through with the order. He hasn’t yet received confirmation that Tripack can fulfill it. Denizens isn’t the only brewery resigning itself to the increased cost. When East Brother heard from its can broker that it would have to order full truckloads of printed cans rather than the half truckloads it had planned on ordering—and store the cans itself rather than having the supplier hold them—Lightner says he had to bite the bullet. The storage aspect is especially important given the number of cans in a full truckload: approximately 155,000 16oz cans, or 200,000 12oz cans. The brewery’s can sales were up between 50-70% since before the pandemic began, so East Brother chose to order one full truckload of cans for each of its four core beers at a total cost of $80,000 for 622,400 cans. Long-term, that will save the brewery money, as each can is slightly cheaper when ordered by the full truckload. But having to find that cash all at once was unexpected. Lightner says the can shortage has been one of the most stressful events he’s confronted since the brewery opened in 2017. Some observers have blamed aluminum tariffs imposed by the Trump administration in March 2018 for disincentivizing American manufacturers from adding capacity. But Saxco’s Lindsay Boudreaux says the tariffs are less of a factor than the plain fact of static supply and dramatically rising demand. That sounds about right to Lightner.
“It’s like toilet paper,” he says. “It becomes every person for themselves.” About SightlinesBeer is one of the most dynamic industries in the world. Nearly everyday, something happens that hints at a possible future that none of us could have predicted. It’s a business, it’s a culture, it’s constantly changing. This is us keeping up.www.saxco.com