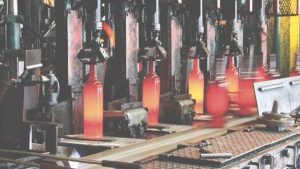 Russia’s invasion of Ukraine in February 2022 has had an unexpected impact on the global wine trade—it’s driven up the price and availability of wine bottles and glassware.

Pier Sfriso owner of Sfriso Winery in Treviso, Italy, was told in April that bottle prices were about to rise by 15% to 20%. At the end of August he was notified that prices would rise another 22%.

“A lot of suppliers are telling us take it or leave it,” he says. “If you ask for 15,000 bottles, they say they can supply 3,000 and will deliver when they can.” Sfriso adds that there are fewer types of bottles to choose from, with prestige sparkling bottles more difficult to find.

Of all the industries hurt by the loss of cheap Russian gas, glass has been one of the most affected. The continent hosts 162 glass plants across 23 countries, all of which must run continuously, and most of which are powered by gas. Glass furnaces can’t be switched off, as the molten glass will solidify and destroy the machinery—which means there’s no way to reduce energy use. And energy prices have risen up to 15 times since the invasion. Industries that rely on glass, from car makers to beer brewers, have reacted by buying everything they can and stockpiling it, according to the Wall Street Journal.

“The pricing has gone up brutally,” says Richard Grosche, CEO of Wegeler winery in Germany’s Mosel Valley. His bottles have risen by an average of 26%, with many suppliers adding an energy surcharge on top. Half-sized and heavier bottles are no longer available.

Glass prices were rising even before Russia’s invasion, thanks to a combination of Covid shutdowns, and increases in the cost of shipping containers and raw materials. Not only that, but Cynthia Fischer, General Manager of West Coast Bottles, California, says that while “a lot of people rely on the glass factories in China, because of less glass being produced in the U.S.,” there have also been a number of recent  factory closures in China. Those that remain open are focusing on standard size bottles and dropping specialty formats.

Fischer advises U.S. winemakers that the time of just-in-time ordering is over. “Prepare to order glass early, so they know they have it.”

Richard Chapman, Chief Supply Chain Officer for wine bottle supplier Saxco, headquartered in California, says that they are seeing U.S. suppliers increase production, though noting that premium bottles come from Europe. “A lot of Champagne bottles come from Europe, and in those markets it might be tight,” adding that Burgundy bottles are also in high demand.

Chapman says that while there has been unprecedented disruption in the glass supply chain in the past three years, Saxco can accommodate most customer demands because they have a wide network of international suppliers. Nevertheless, “I would say that in 2023, especially with European glass, expect prices to have upward pressure and be high.”

The energy crunch is also impacting the production of glassware. According to Maximilian Riedel, CEO of Riedel, prestige glassware remains relatively unscathed by the high gas prices, because “in Austria our furnaces are heated by electricity, and it’s where we produce our hand-made goods, which is about 10% of our business.”

Riedel’s machine-made goods, however, are produced in Germany, where gas is the fuel of choice. “We might have to temporarily increase our price to cover our extra cost.” He emphasizes that the U.S. is such a significant market, that Riedel will keep the market well supplied and will keep price rises to a minimum. “What happens next year, we can’t say, but people who pay in American dollars right now have an advantage.”

He adds that if customers are looking for Riedel, “if you see it, buy it, because logistics have been very difficult.” Riedel says that while container prices have come down from their pandemic high of $25,000, they are still $10,000—three times the pre-pandemic cost.

Wine writer Karen McNeil, who in late 2020 launched a line of glassware called Flavor First, says it’s clear that many major retailers have stopped buying and are running down their inventories of glassware.

Her own line is made in Germany by Stossel, who have told her that while they have plenty of stock on hand, they have also “implemented a 30% surcharge because of natural gas prices soaring.”

McNeil says that, nevertheless, she’s in a good position when it comes to selling wine glasses to the on-trade, because her stemware doesn’t rise above $10 a glass, and can be put in the dishwasher—few restaurants are currently investing in high-end stemware, as they are still recovering from the pandemic.

Things aren’t as bleak as they seemed several weeks ago, when the major business press was speculating that Europe would lose its industrial capacity altogether—EU leaders have now agreed to create a price cap on fuel, a decision that saw gas prices fall by 7%.

Still, the message from the glass markets is clear: if you need it, don’t wait to buy it. And expect the price of many European wines to rise, at the same time as some formats disappear.